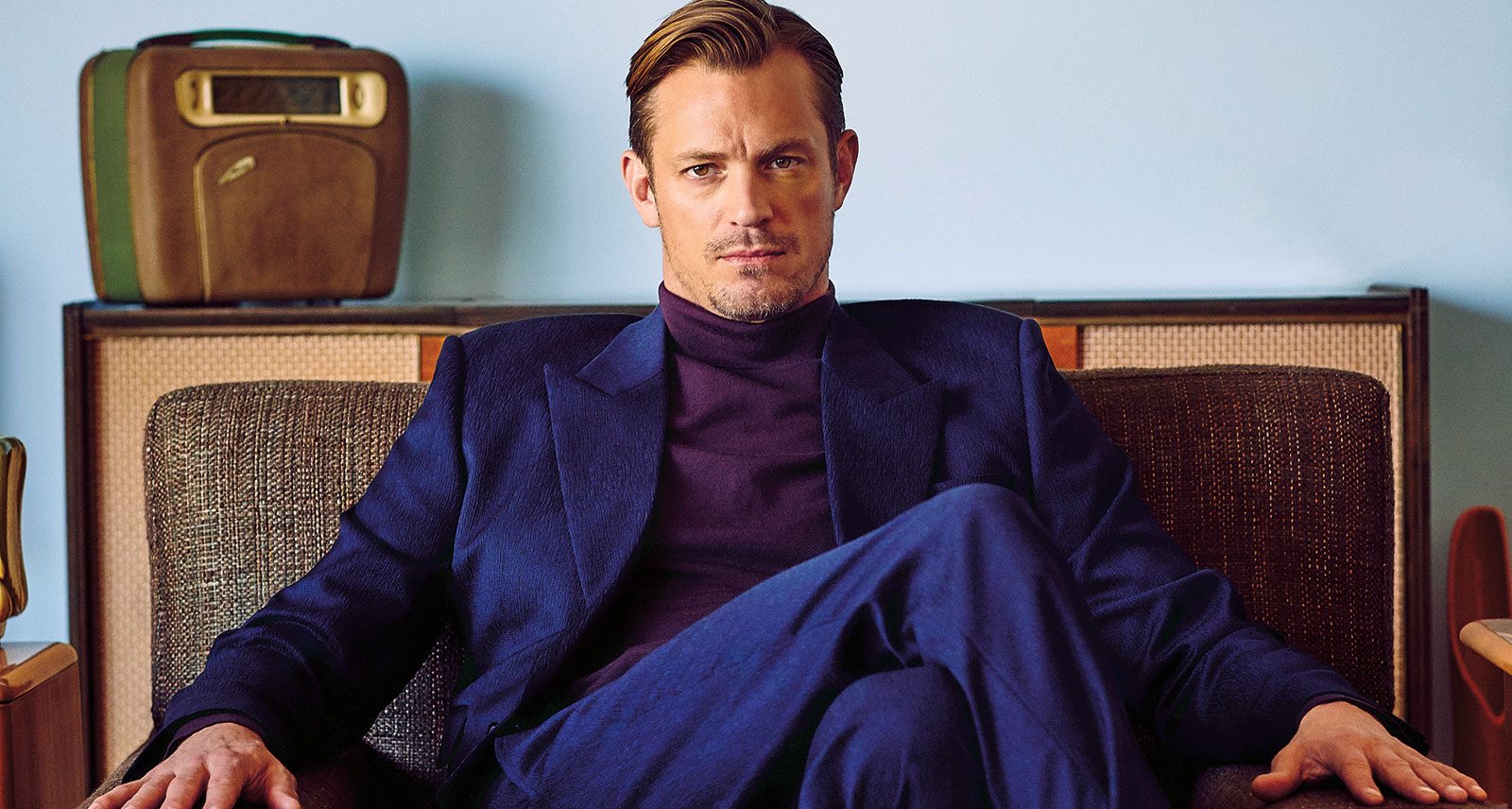 When Joel Kinnaman joins our Zoom call, I’m surprised to see a cloudless sky and shimmering ocean. He tells me that he and his best friend have recently decamped to Chicama, a small coastal town in northwestern Peru, for a holiday after wrapping production of the second season of his Apple TV+ show For All Mankind, which airs in January. “I’m in some kind of surfing paradise, and at the same time being consumed by the election and following that, biting my nails off,” he says, flipping the camera to show me the breathtaking view of the world’s longest wave.

This election represents a pivotal moment in American history. The agonizing process of counting votes in the days leading up to Biden’s win let our imaginations run wild about what the future holds. What does the future of democracy in America look like? How will this election shape the course of history? (Much to Kinnaman’s relief, two days after we speak, Joe Biden is voted president-elect and Kamala Harris, the first Black woman vice president–elect.) These kinds of “what if” projections about the future are at the core of For All Mankind. The show presents an alternate history of the space race in which the Soviets beat the Americans to the moon. Kinnaman stars as Ed Baldwin, one of NASA’s top astronauts, who led the failed lunar mission, demoralizing NASA but inspiring the Americans to catch up, training women and women of colour — marginalized groups excluded from space exploration at the time — in the process. “The actual space race was kind of a depressing story,” says the Swedish–American actor. “It was like, we went to the moon and that was amazing, and then everyone was hoping and felt we were headed to outer space to continue human exploration, but then it just got dismantled.” Kinnaman was drawn to the show’s intelligent writing and powerful storytelling. Each season jumps ahead in time, depicting the lasting political and cultural impact of life-changing events. “I thought it was just such a smart way of both telling that story, of leading up to that story, and then where we wanted it to go,” he adds. “It’s a way of telling a historic story with complete creative freedom for where it goes.”

“Even though something can be challenging physically and I feel like I’ve been able to give enough complexity to a role in an action format, I still always need to come back and do dramas that demand that emotional side of me.”

Kinnaman’s resumé portrays an actor of impressive range. In his home country of Sweden in the early aughts, he got his start in theatre and independent film before breaking out as the star of the crime drama Snabba Cash (Easy Money), for which he won a Swedish Academy Award. His performance in AMC/ Netflix’s The Killing as Stephen Holder, a colourful homicide detective, helped establish him as a Hollywood leading man, landing him roles in crime thriller and action blockbusters including Suicide Squad (for which he’ll reprise his role as Rick Flag in the sequel), The Informer, and Run All Night. His latest project, Jérémie Guez’s action thriller Brothers by Blood, an adaptation of Pete Dexter’s 1991 novel Brotherly Love, stars Kinnaman and Belgian actor Matthias Schoenaerts as brothers reckoning with family trauma over several generations, will be available on demand in January. SWEATER BY GUCCI (PRICE UPON REQUEST).

It’s easy for Kinnaman, with his leading-man looks, toned physique, and pensive stare, to be pigeonholed as a run-of-the-mill action star. But he’s managed to escape that Hollywood trap thanks to his eye for complex roles that demand nuance, from 2012’s indie rom-com Lola Versus, where he played Greta Gerwig’s artist boyfriend, to the all-American astronaut in For All Mankind. “Even though something can be challenging physically and I feel like I’ve been able to give enough complexity to a role in an action format, I still always need to come back and do dramas that demand that [emotional] side of me, because projects that focus on the drama, where that’s the sole purpose of the story, that’s always going to be more emotionally demanding and complex,” he says of the importance of bringing vulnerability to his work.

As Ed, Kinnaman was forced to tap into a darker emotional territory than ever before, as his family endures a tragic loss at the end of the first season, forming the backbone of the character’s struggle. “With Ed, I think in many ways it’s not the kind of character, at face value, that I would be drawn to,” he says. “He’s sort of an all-American hero, put together and square and rigid, and you don’t see his brokenness; there’s no obvious brokenness in him.” But the selling point for Kinnaman was trying to understand how Ed, a leader who is expected to be strong and stoic, navigates a loss of this magnitude. “It’s so important [for Ed] to project strength to the world and to not show vulnerability because he’s a leader, he’s the one people are going to look to be strong and have his shit together.” Kinnaman likes to work. But he also keeps just as busy offscreen. He’s opened several restaurants in Sweden (“Food is one of my great interests and sources of happiness in life”), is learning Spanish (“Now I’m in Peru and I’m talking to people”), and has even incorporated his on-set martial arts training into his workout routine (“They’ve become very important aspects of my daily life and my development as a person”). He’s also an avid surfer, a sport that requires a great deal of discipline, focus, and flexibility to level up. Sort of like acting.

After we end the call, I google the world’s longest wave. It’s nearly four kilometres long, a natural marvel. I wonder how far he can ride it.

LEAD IMAGE: SUIT BY DZOJCHEN, PRICE UPON REQUEST; TURTLENECK BY COS, $115.

STYLING: ADAM BALLHEIM (THE ONLY AGENCY)