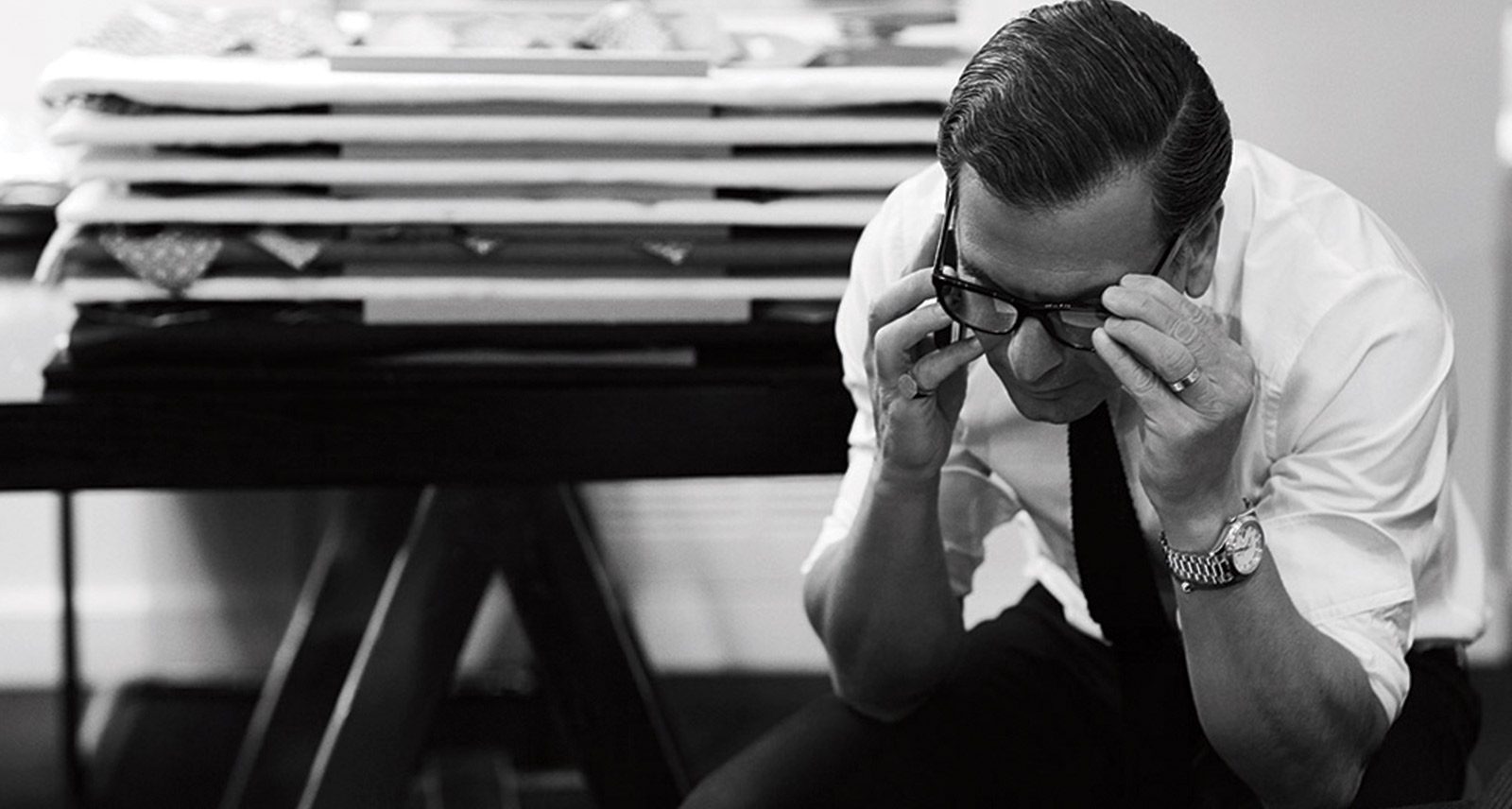 Scott Schuman is a true fashion legend. His long-running blog The Sartorialist is a living document of how global style has evolved over the last 15 years, the most memorable images of which have been bound and printed in four beautiful coffee table books. His latest, The Sartorialist: MAN, is an expansive collection of how men of all stripes dress today. And we could all learn something from it. How have you been dressing in quarantine?
For me, quarantine is different, but it’s not incredibly different, because I’ve worked from home as a photographer for years and years and years. Obviously, during the winter, it was more casual. But you know, I’m always in shorts and a T shirt in the summer, so that was pretty much the same. It’s not so much that I dress differently day to day, I just have far fewer meetings to go to, right? So maybe a T-shirt, maybe shorts, or pants and some kind of fun sneaker or Prada shoes, something like that. The covers of your previous books feature one strong image, but you’ve chosen a grid for this. Why?
When you’re trying to do a menswear book, and one that you feel is a little more inclusive and a little bit more modern, it’s hard to pick one image of one particular kind of guy that will say what you want and show that there’s a lot of different kinds of style out there now. So, I thought it was much easier to pick a lot of different kinds of guys than to take one image because I wanted people to be able to pick up a book or see the book in a bookstore and say, “Oh, I don’t really look like that guy, but I look like that guy.” Right? And actually for the bespoke versions, the hardcover limited- edition versions of the books I’ve done in the past, especially the ones with Penguin, those a lot of times had a grid, the slipcover had a grid. So I’ve done that before. And I always kind of like how, you know in one way, it’s a bunch of different people, but also, when you’re not looking that closely, it just looks like beautiful colours and shapes. It can be kind of abstract.

In the last 10 years or so, men have had much more freedom to experiment with their style than ever before, but there have always been “rules” to follow. As a street style photographer capturing what men are actually wearing, what do you think are the new rules of men’s style?
It’s one of the things I really ask myself. When you look at what the “rules” are – some of the rules are totally ridiculous and make no sense in the modern world. But a lot of rules like good manners are just based in common sense and based in something that’s worked for years and years. I found as someone who was taking photographs of guys all the time, I started to fill up with ideas about fit, because this is a great equalizer. You know, it doesn’t matter how much something costs, it could be $5,000 or $500, if it doesn’t fit good, it doesn’t look good. So, for me, I think the big thing that still holds true are certain ways of dressing certain body types to make your body look good. Can you break those rules?
I think this book is for a lot of guys, who are like, I love fashion, and I appreciate it as an art form, but I just want to look nice in my clothes now. And there are certain ideas of howto do that, depending on what kind of body type you have. That seems to still always be true. I wrote the whole thing on different body types and wrote the introduction for it, and then I think right before I was getting ready to finalize the book, I put in kind of a disclaimer underneath and said, “Just note that you’ll see a lot of guys in this book doing the exact opposite of what I’m telling you in this section and they look great – and that’s fashion.” So I think there’s a real distinction between guys that want to look good in their clothes, and guys who want to have fun with fashion. I don’t think one is better or more important than the other.

In the past, men’s books have always sided with the idea that you have to buy clothes that are going to last forever, which is fine for some guys. But they always make fashion so frivolous and silly and funny. And to me, I don’t think it is. It’s about great design. I never feel bad about the things I’ve bought in the past; I’ve always loved them. And it doesn’t matter if I wore them for one season or five seasons, they meant something to me at that moment. So this book is more like, “Okay, this is kind of a funny idea.” I never realized I had so many photographs of guys wearing leopard in a way that actually looks cool, or guys wearing sequins in a way that actually looks cool. So, you know, there’s less rules and more kind of suggestions, or “Hey, I think this, here’s an idea.” And that’s what I think really makes it more modern. What’s the difference between style and fashion?
Style is from your point of view, right? It’s something that makes sense to you. I know guys who, you know, they don’t necessarily look fashionable, but they always look like themselves – they always look chic, and they look great. There’s a section in the back of the book of these guys, and I say, you know, maybe fashion isn’t for you. Maybe you’re not great at mixing colour and pattern and all of that, so just wear a uniform. Fashion is kind of fitting into someone else’s take, and people, maybe when they’re younger, they’re doing more fashion because they’re trying to figure out what their take is; they’re trying a little bit of this, a little bit of that. As they get older, they start to realize, “Okay, I like this.” I think sometimes fashion leads to style.

Where’s men’s style going?
Before, tailored clothing was the default for all men. But I think menswear is headed closer to what womenswear is. Womenswear doesn’t really have any rules anymore. There’s just so many different kinds of style that in women’s, there are no rules that you can really use. And I think men’s is headed that way. I think there will be tribes, as opposed to one default kind of thing. You already have tribes with like a Rick Owens kind of thing, or a very classic thing like what Drake’s does, the very tailored guy. You have the guys who love wearing vintage things. I think it’s just going to become more segmented like music, like television, like movies – everyone can find their thing and then really dive into that.