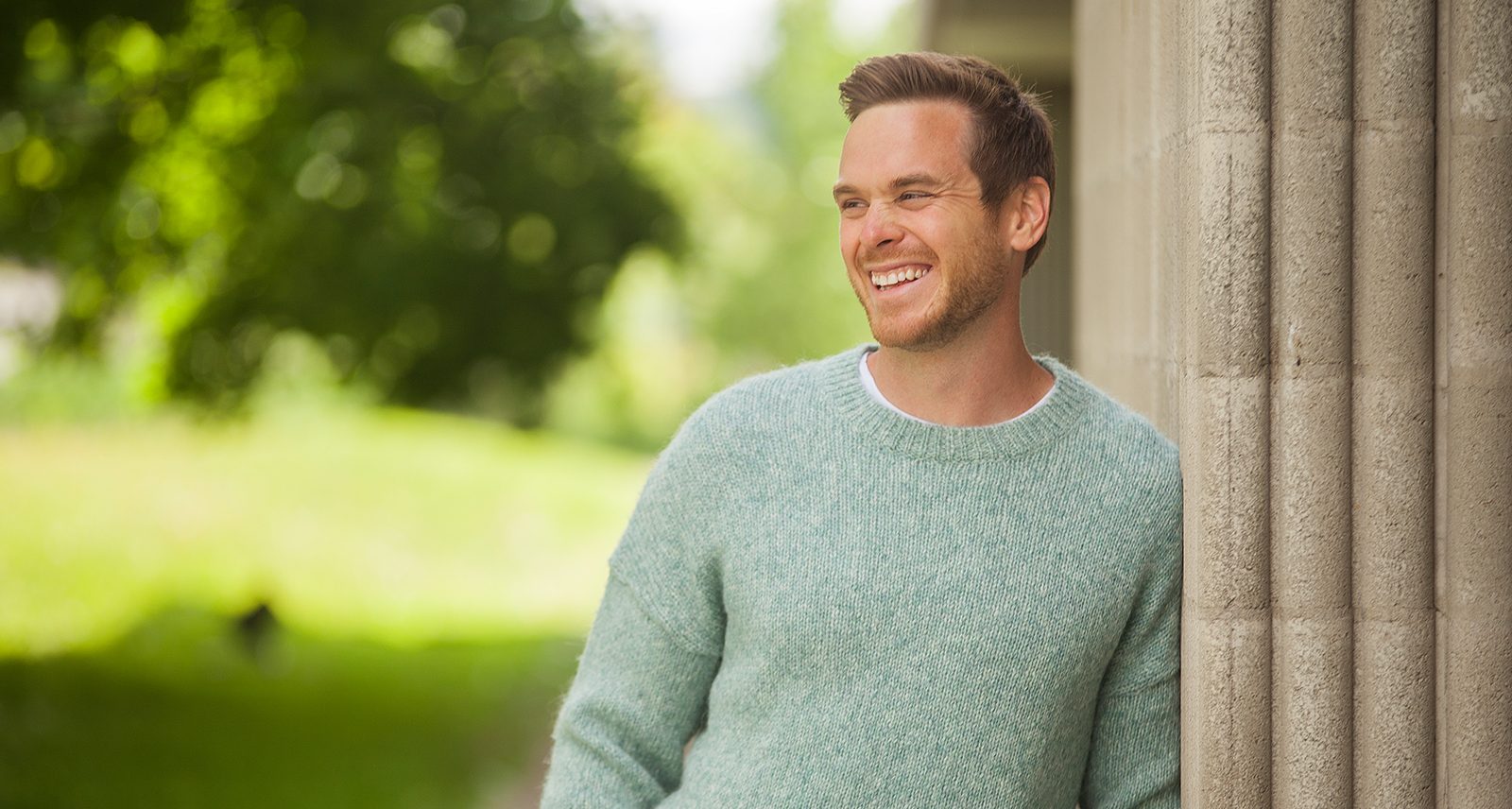 Mike Holmes Jr. grew up on home renovation shows. Quite literally, actually – he first started working for his dad, Canadian contractor-turned-Canadian TV icon Mike Holmes, when he was just a teenager, going on to appear on a number of his dad’s many shows over the years, eventually becoming a licensed contractor and carpenter in his own right.

That wasn’t always the plan – like most teens, the younger Mike says he wasn’t initially sold on going into the family business, even if that business was renovating houses on TV. Now though, Mike Jr. and Senior are working together again, with two shows: HGTV Canada’s Holmes and Holmes and DIY’s Holmes: Next Generation, with his sister Sherry, making the Holmes essentially the first family of HGTV Canada (sorry Property Brothers).

While other home renovation shows preach doing it yourself and cheap-and-easy fixes, Holmes and his dad preach doing it right – mostly because they’ve seen it go wrong too many times to count. And with the number of skilled trades workers in Canada dropping, Mike Jr. is joining his dad’s efforts to rehabilitate the industry’s image, one home reno show at a time. We spoke to the up-and-coming contractor about growing up on camera, how he’s trying to end the stigma associated with working in the construction industry, and what home improvement projects are best left to the professionals. (Spoiler alert: it’s most of them.)

I know you’ve been working for your dad since you were 14, but when did you start looking at this as not just a part-time job, but as a potential career?

It’s funny, I never wanted to get into the skilled trades. I wanted to get into firefighting – and that was probably because my dad was a contractor. I wanted to do something a bit different. But at 14, when I started working for him, that’s when I started seeing it as a career. I fell in love with it. Like, “OK, I love working with my hands.” I’m an active guy, and I can get bored quick, so I need to be stimulated, and as a contractor, doing renovations, you’re constantly dealing with different problems every day. So it quickly became a reality to me that this is something I could see myself doing. I’m guessing 99 per cent of your day-to-day job happens off camera. Which I think people may not realize from watching these shows.

Is that the biggest part of your job that people don’t see on TV?

There’s so much. There’s the days where we’re not filming, that we’re on site trying to keep things moving forward. Then there’s the days in the office where we’re planning, we’re strategizing – whether it’s a new business endeavour or how we can make things work better – there’s so much that goes on behind-the-scenes that people don’t see. It’s funny, sometimes you’ll get, “Oh, you make it look so easy. It must be nice!” People don’t realize the hours, the time that goes into it.

Home reno shows have really exploded in the last 15 to 20 years, which your dad’s been a big part of. What effect do you think these shows have had on the industry, and people’s perception of the industry?

I’ve seen good and bad. In a way, it’s made the construction industry look good. It’s made people want to get into it again. Which I think is very important. However – and I’m not going to name any shows, I’m not knocking [other] shows – but there’s some shows out there that preach, “You can do it yourself, you can do it for cheap,” and that’s what I don’t like.

There’s a reason you need to hire professionals to do these jobs. You shouldn’t do electrical, plumbing, structural, any of that yourself. And even the stuff outside of that, you should really hire a contractor. I mean, listen, if you’re doing the finishes in your home, and you can live with a crappy finish, by all means, do it! [Laughs.] But there’s a reason we have professionals that do that day in and day out.

It does seem like there’s been a real resurgence of interest in people working with their hands more – call it the Ron Swanson effect, I guess. Do you think it’s important for people to try to get away from screens for a couple hours and learn a trade?

You know what, it’s not necessarily for everyone. But what I will say is, it’s super important for me. Now, being a licensed contractor and a carpenter, I can take that skill home and I don’t have to hire out [for projects]. I can do little things around the house, like hanging my TV. It translates to so many different things, being good with your hands. It’s an important skill.

Are there any good introductory projects for people to tackle to see if this is something they could be into, or have an aptitude for?

That’s a tough one. There’s the “lipstick and mascara” around your house, the finishes. You can try on that. Because at the end of the day, as long as you’re not touching anything important in your house, you can see if this is something you like doing. Or, for me, I love to do woodworking. I do a lot of custom furniture builds. So maybe just taking on a little project like that. Look up something on YouTube or Instagram and get inspired by a build. You can create something, craft something, and that’s an easy way to say, OK, I like working with my hands, or I don’t.

Basically, as long as you’re staying away from electrical, is what you’re saying?

Yeah… Stay away from the areas in your home that are going to cause problems for you and your family. Again, if you can deal with the poor finishes, that’s one thing. But what you don’t want to deal with is an electrical fire, a leak which is going to cause mold, or structural damage – because if the house collapses on you, that’s a real problem. [Laughs.]

There was this thing on Twitter a while back where people were talking about the part of their brain they can’t turn off because of their job. What’s that for you as contractor? Is there one thing you can’t help but notice whenever you walk into a place?

Oh, definitely. I can’t help but look at the poor finishes. I think because it drives me nuts that people aren’t hiring professionals. Whether it’s the do-it-yourselfers or people who just slap on a tool belt and say, I’m a contractor all of a sudden, it’s the poor quality, it’s the tile work, not seeing the grout lines line up properly. Not seeing the heart, the craftsmanship in the work, that really drives me nuts. Restaurant bathrooms are probably the worst, because sometimes they look like you’re just throwing tiles at the wall hoping they stick. The trim work. Seeing mitres that don’t line up. Seeing lazy work, it drives me nuts! Just put some pride into your work, that’s all.

So I know a lot of you HGTV guys are known as heartthrobs, and I saw you were named one of Hello! Canada’s 50 Most Beautiful Canadians for 2018. First off: congratulations.

[Laughs.] Thank you, thank you.

You weren’t the only HGTV host on the list though. I saw Scott McGillvray at #27, the Property Brothers at #13. You came in at #17. How much competition is there between you guys?

You know, I can’t say that we have compared that. [Laughs.] There’s definitely good-natured competition; we all give each other a hard time, but it’s because we all get along and we like each other. But I can honestly say I don’t think that one’s ever been brought up in a conversation.

Well, you kind of have to now. Fire up that group text! How long did it take you to start feeling comfortable in front of the cameras?

At first, I just worked behind the scenes, so I was used to the camera being around, but I wasn’t used to it being on me necessarily. It was always on my dad. What I really enjoyed was the construction part, and then as I got older, I got more comfortable in front of the camera and I got more comfortable just being me. My dad always said, “Just be yourself in front of the camera.” Then all of a sudden, people were like, “Hey, we really like you on camera.” It was just this natural transition – I wasn’t chasing after it. That wasn’t why I was doing what I was doing, but it ended up working out.

Now there’s this kind of passing of the torch with you and your dad. Although I’m sure he wouldn’t want to think of it that way just yet…

Yeah, probably not. [Laughs.] But I definitely get what you’re saying. It seems like the natural transition of things. And we’re having a lot of fun doing it. We love what we do. Creating the shows is something that I didn’t necessarily plan on doing, but it’s something that I really enjoyed being a part of.

On a more serious note, I read your dad’s article in The National Post where he said that Canada’s facing a shortage of skilled trades workers. What are some of the ways we can start to combat that?

I think it needs to start from the top down. I really think the government needs to get behind the skilled trades and the rules and regulations need to change. Take Switzerland as an example: at 12 years old, they look at the students and they say, “You learn better with hands-on, so we’re going to cater to your learning and we’re going to cater to you going into the skilled trades.” There, to be a tile setter, you have to be licensed. They really break it down so you have to be licensed to do what you do, and you see a lot less problems in the construction industry. We need to take a page out of their book. Because here, we have people just throwing on a tool belt, saying I’m going to flip a house, I’m going to do it without permits. We need to make it harder for those guys.

We also need to start supporting the students. We need to bring construction back into the schools. We need to tell kids it’s OK [to get into construction], and the parents as well. There’s a stigma we need to fight. Unfortunately, the biggest attraction for people is money, but there’s a lot of money in this industry! And there’s nothing wrong with getting your hands dirty, there’s nothing wrong with working with your hands. That doesn’t make you less intelligent than the next person. It’s a great industry to be a part of. Plus, right now, there’s a huge shortage [of workers]. So just financially, it’s a great place to be.

How is ‘Game of Thrones’ Going to End? Here Are the 20 Craziest Fan Theories