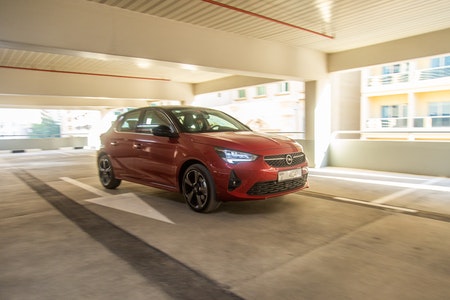 In the looks department, the Opel Corsa is a handsome car. Even though it shares its underpinnings with the Peugeot 208, the Corsa gets its own flowing and distinctive looks that prevents it from resembling anything else on the road. The model I got to review was the top-spec Elegance + trim that gets you 17-inch alloys, a panoramic sunroof and some additional driver safety aids.

Stepping inside the cabin makes you realise the Corsa has its share of hits and misses. The Corsa provides you with an excellent seating position. The seats themselves could’ve done with more lumbar support, but it’s not a deal-breaker. Travelling longer distances seated on it should be a comfortable experience. However, the rest of the cabin quality feels lacklustre.

Opel could’ve been more imaginative with its interior design. The entire cabin is brimmed with blacked-out panels and trims. The build quality on the inside isn’t the best, but it’s on par with the price point it serves. Though the design is where the German brand could’ve added more zing via brighter colours or two-tone interiors to make the cabin more inviting.

Occupying the centre of the dashboard is the 8-inch infotainment touchscreen. It houses controls to all Corsa’s multimedia features comprising navigation and music. Opel’s in-house software for this screen is functional and easy to use, though it also gets Android Auto and Apple CarPlay which gets utilised by most of the users, including me.

To summarise, the cabin of the Opel Corsa has good enough space to seat four adults. People bigger than average size might have to adjust by cramming or squishing themselves in. However, the massive panoramic sunroof that stretches to the rear seats lends some much-needed airiness to the cabin. The only drawback here is the manual slider instead of automatic buttons to operate the sunroof.

On the performance front, the Corsa comes with a 1.2-litre turbocharged engine producing 130hp/230Nm torques and gets mated to a six-speed automatic transmission powering the front wheels. Smashing the throttle will make you experience the slight turbo lag initially, but once the car gets up to highway speeds, it’s pretty quick. Users would enjoy pushing this car to its limits.

The handling is another aspect to write home about. The car manages itself well, and the steering weighs up nicely to provide some extra confidence to the driver, allowing him to push the limits even further. Solely from the looks, you may have second thoughts about driving the Corsa enthusiastically, but once you grab it by the helm, you’ll be tempted to push it even harder, especially around bends and curvy roads.

But when not in the mood to become the next Lewis Hamilton, the Corsa doubles up as an efficient highway cruiser. The cabin insulation manages to keep wind noise out but fails to do the same for the engine noise. The noise of the running engine doesn’t penetrate the cabin at all times, but you can hear it on hard acceleration, and it isn’t a pleasant experience to the ears.

This brings us to the final aspect – the price. Opel retails the Corsa with a starting price of AED 69,900, and this puts the Corsa in a highly competitive segment. All rival brands have their respective offering catering at this price. Though that doesn’t diminish the fact that the Corsa is an interesting car to own, buyers should certainly look at it before cementing their final decision. Add Opel’s three-year service package and a five-year warranty to the mix, and the Corsa stands tall in the budget family-friendly hatchback category.

FORD BRONCO ARRIVES IN THE UAE