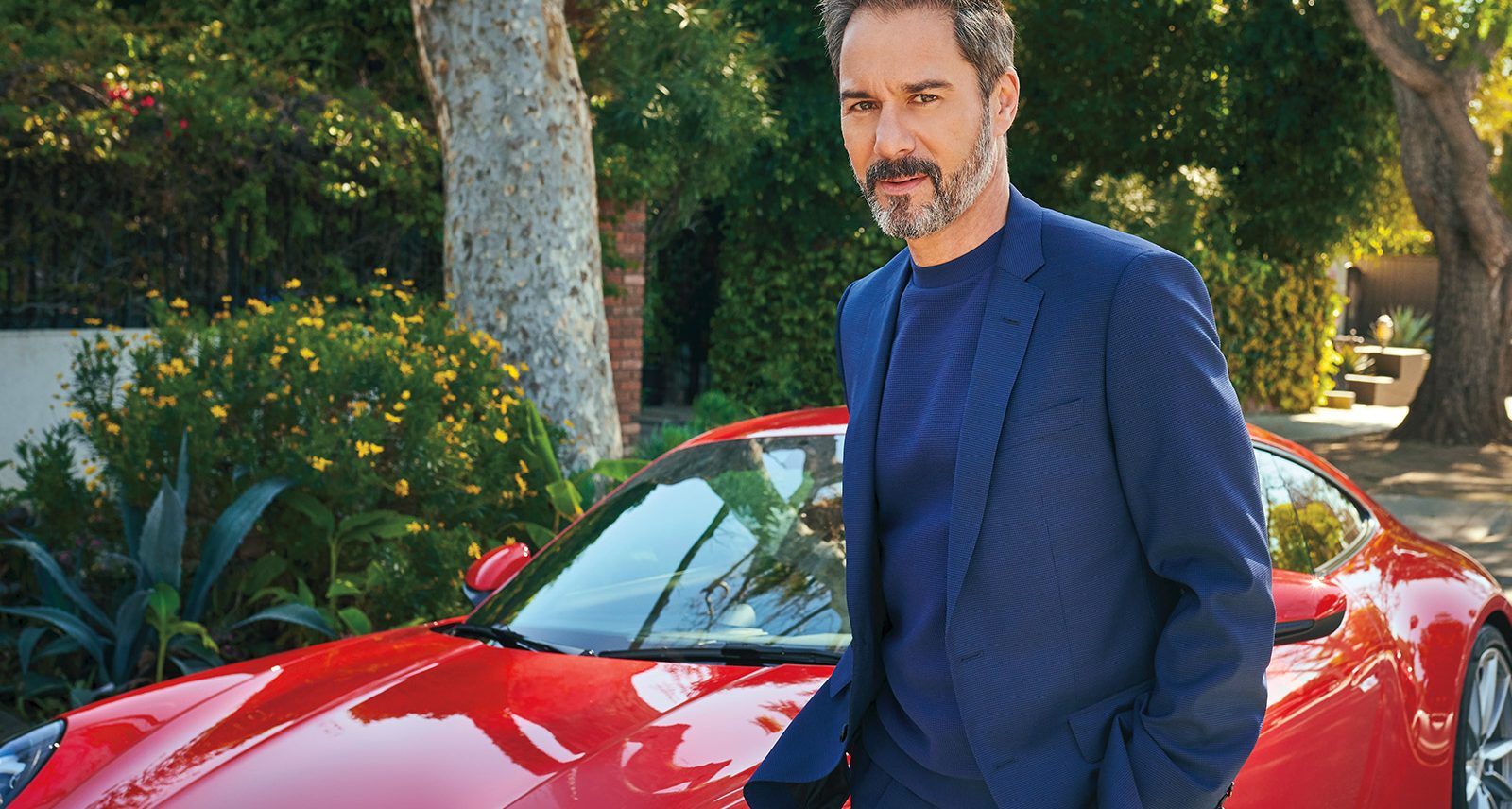 Past and Present Will & Grace star Eric McCormack used to drive a Nissan Pulsar — but that’s not to say it’s a ride he’s eager to return to. “That was how I learned that cars need oil,” the Toronto-born actor says. “By having my Pulsar break down on the 401 on my way to perform Measure for Measure or something in Stratford.” McCormack doesn’t usually identify as the wistful type — “I very much live for five minutes from now,” he says — but lately he’s had to get used to the occasional flashback. After reuniting with his former Will & Grace crew to film a 2016 Hillary Clinton endorsement video — fighting Trump’s brand of “Make America Great Again” with appeals for more innocent nostalgia — he had NBC on the line asking him to return fulltime to the role that had defined his thirties. Since finishing the sitcom’s first run in 2006, he had been keeping busy with steady television gigs — playing, among other things, a time-travelling FBI agent — while also time-travelling from young dad into distinguished family guy. “I love to challenge myself with a new character or series, but I need to know that home is a reliable thing,” he says. “And it has been with my wife and my son for a long time.”

Of course, for the past three years, McCormack’s been back to portraying eligible bachelorhood in his other home: Will Truman’s apartment. “Looking out over there, I feel like Picard, and that’s my big gay expensive New York spaceship,” he says. “I’m very at ease in my body there.” JACKET (PRICE UPON REQUEST) AND SHIRT ($230) BY JOHN VARVATOS.

And yet, as much as the revived Will & Grace has spent Thursday nights transporting its viewers back to the ’90s, it has also made a point of confronting the ways that times have changed. “Even when we’re telling the same storylines, it’s one thing for people to whine at each other when they’re 31, but it becomes another argument when you’re 50,” McCormacksays. “There’s a different perspective. I came to really appreciate that if you get to live in somebody’s shoes for long enough, there are richer veins of humour and deeper things to mine.”

Another thing that comes from getting a chance to relive one of your defining career moments? “A lot more gratitude.” Filming Will & Grace the first time around, McCormack didn’t always have the perspective to stop and enjoy the ride — not to mention the car he was driving. Case in point: the Porsche Boxsters that NBC bought each of Will & Grace’s core cast members at the end of the show’s second season, in 2000. “I left mine out in the rain — it never rains in California, but it rained that one night — with the windows open and the hood down,” McCormack confesses. “The electrical system got completely destroyed.” After leveraging the next best thing to time travel — an auto shop mechanic — to restore the car to its past glory, McCormack auctioned it off for charity. Now 56 and fresh from filming the series finale of Will & Grace’s three reboot seasons, he’s overseeing finishing touches on a quiet escape in Vancouver. “That’s my version of big extravagance,” he says. “And we’re now surrounded by Americans extremely envious of it.”

As for his current ride? It turns out he’s a Vespa man. “We live near Universal [Studios], so when I go to Santa Monica, people will ask if I’m insane. But I get frustrated in a car when I’m stuck behind someone in a pickup truck,” he explains. “On Mulholland in a Vespa, I can make it work and relax.” After successfully mastering time travel, he’s not looking to stay stalled. That, and Vespas do better in the rain. Oh, and about that car…

We wouldn’t have our cover star pose with just anything. Much like Will & Grace was subtly rebooted for the modern era, so too was the Porsche 911 Carrera. No doubt you recognize its iconic silhouette from miles away. But this eighth generation is entirely modern: a little lower, a little wider, and a whole lot more powerful. The version seen here sports a twin-turbo flat six engine in the back, pumping out 379 horsepower and rocketing from 0–100 km/h in 4.2 seconds. But that’s not even why we love it. Much like McCormack himself, the 911 is truly timeless.