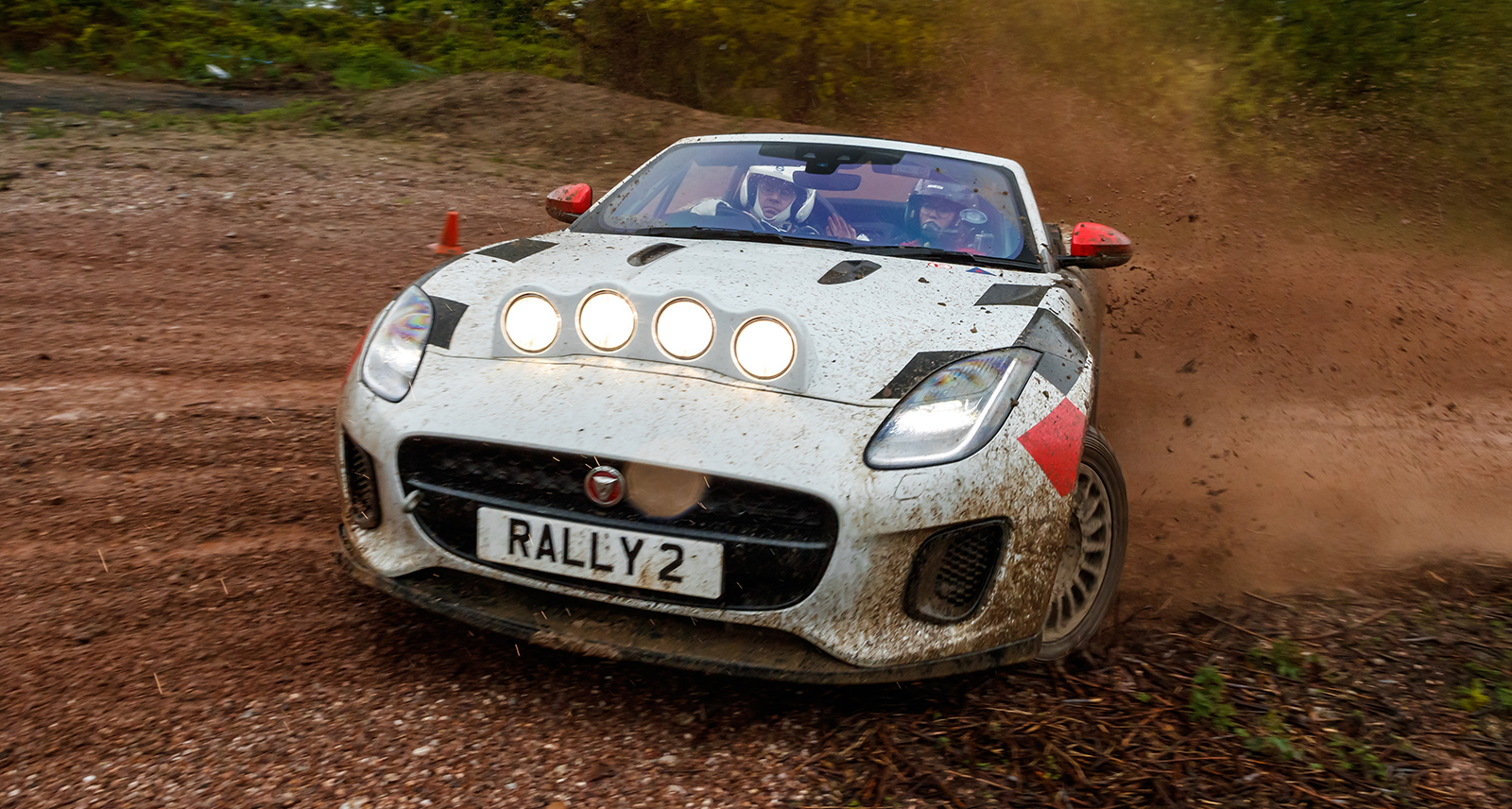 Today absolutely nobody associates the Jaguar brand with rallying. Nobody. If anything, people recall the multiple Le Mans wins and that's it.
But the early history of the British marque actually had more to do with success in rallying than on racetracks... 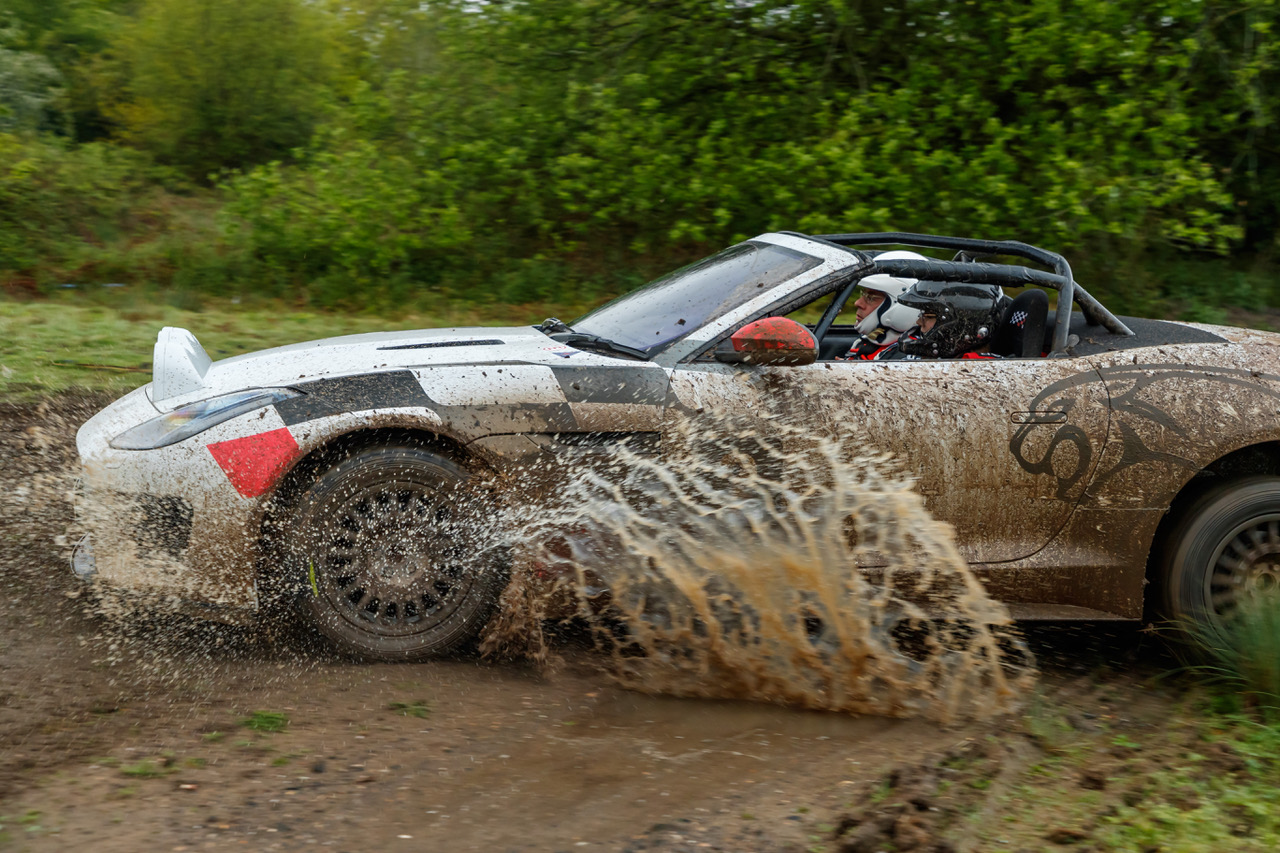 In the aftermath of World War II, the ability to export cars was the key to the survival of British automotive manufacturers, as they would only obtain an allocation of steel if they helped the international trade balance of the country. William Lyons, the owner of Jaguar Cars, wanted to be able to build money-making steel sedans for the home market, and in order to make this possible created the XK120, a car which symbolized both the post-war euphoria and the misery of rationing in Britain. From the outset the new car was promoted abroad, with the high-speed Jabbeke run in Belgium the first stage in its triumphant life. 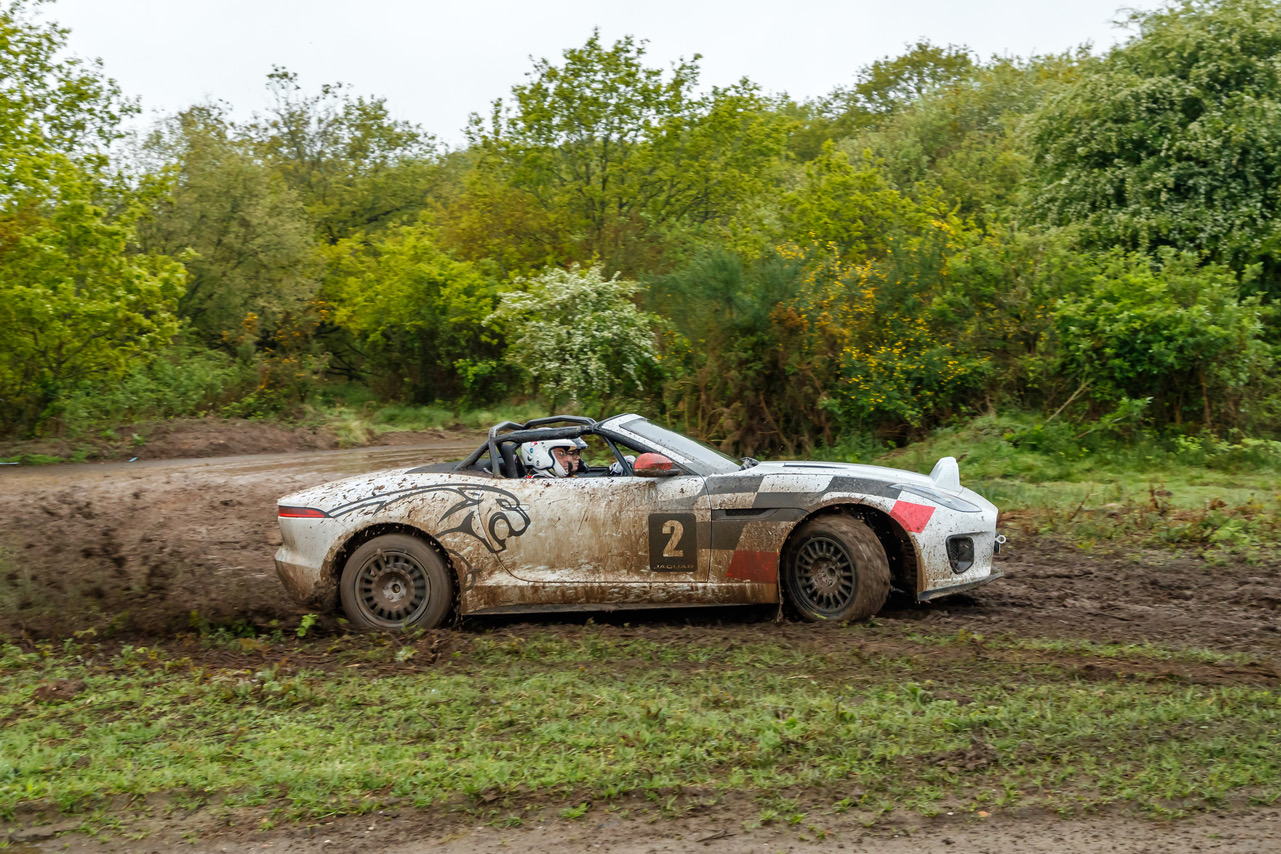 Lyons had a daughter, and she married a competition driver, Ian Appleyard (also an Olympic-level alpine skier and a serious ornithologist!). She must have been quite fearless, as she became his co-driver on some really grueling rallies, including the Rallye des Alpes (which he won five times, and was once stripped of his win, typically, by the envious French) and the Tulip Rally. The car he drove bore the numberplate NUB120, and it still exists, cherished by the Jaguar Daimler Heritage Trust. Around 20 years ago I was lucky enough to drive NUB120 in the streets of Coventry. Now it has become priceless and this sort of thing is unlikely to be repeated. I remember very vividly how physical that car was to drive, nose-heavy with unbelievably heavy steering. No idea how Appleyard managed to so efficiently manhandle the XK120 over the Alps, with all those slippery gravel hairpins, and zero barriers preventing a long and fatal fall. 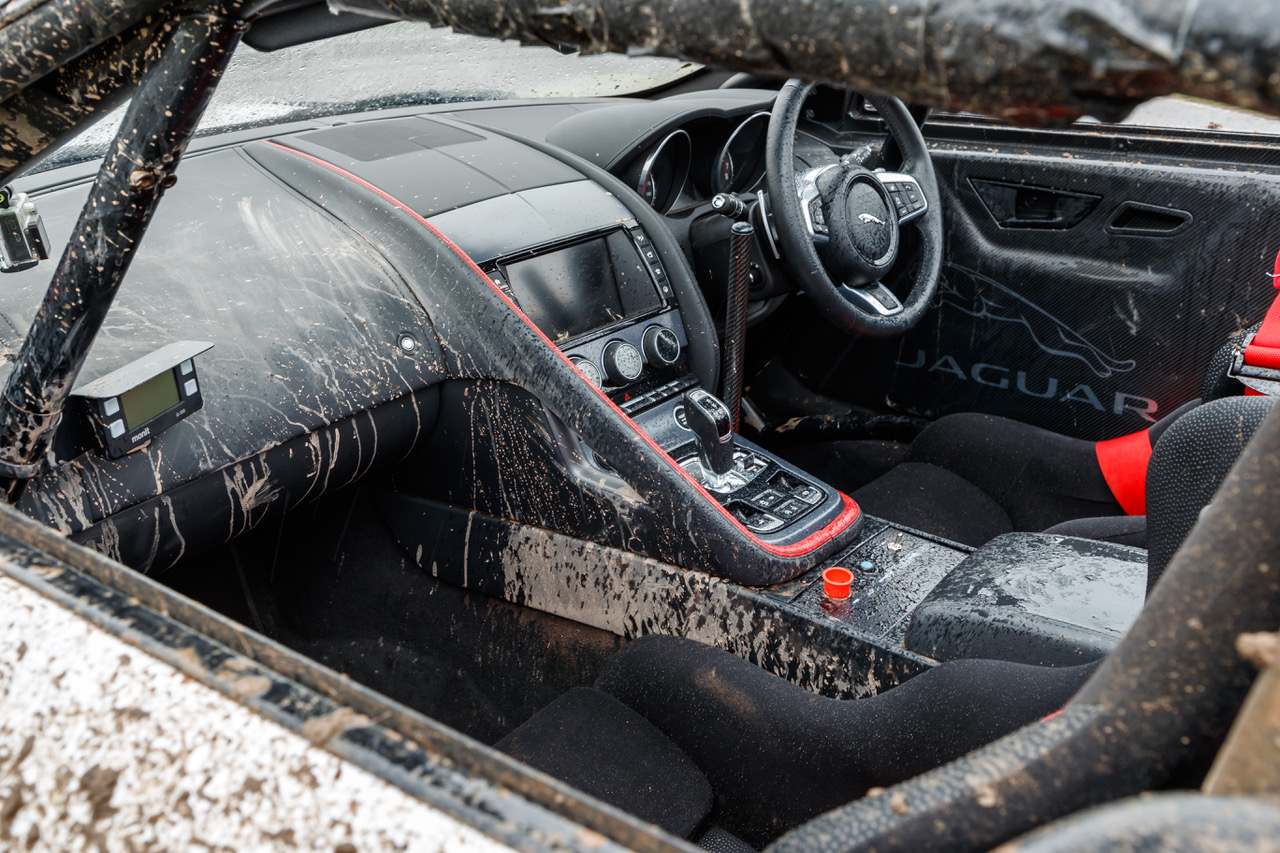 A more surprising rally Jaguar was the huge and lumbering Mark VII, which actually won the Monte Carlo outright in 1956, with the talented Ulsterman Ronnie Adams at the wheel, and Frank Biggar plus Derek Johnston comprising the rest of the crew (all of them Irish, in fact). It beat the favorite, the factory Mercedes of Walter Schock, a truly capable driver in his own right. In those days rallies were different, with very long endurance sections and short timed tests, and reliability plus driving comfort were often more important than short bursts of speed. As it happened, Jaguar won both at Le Mans and at Monte Carlo in the same year. William Lyons became Sir William Lyons in recognition of his contribution to the British economy, and the Queen visited the Browns Lane factory. All was good, but a year later Jaguar chose to withdraw from motorsport and, although it returned to racing much later, the rallying part has been dormant for a very long time. 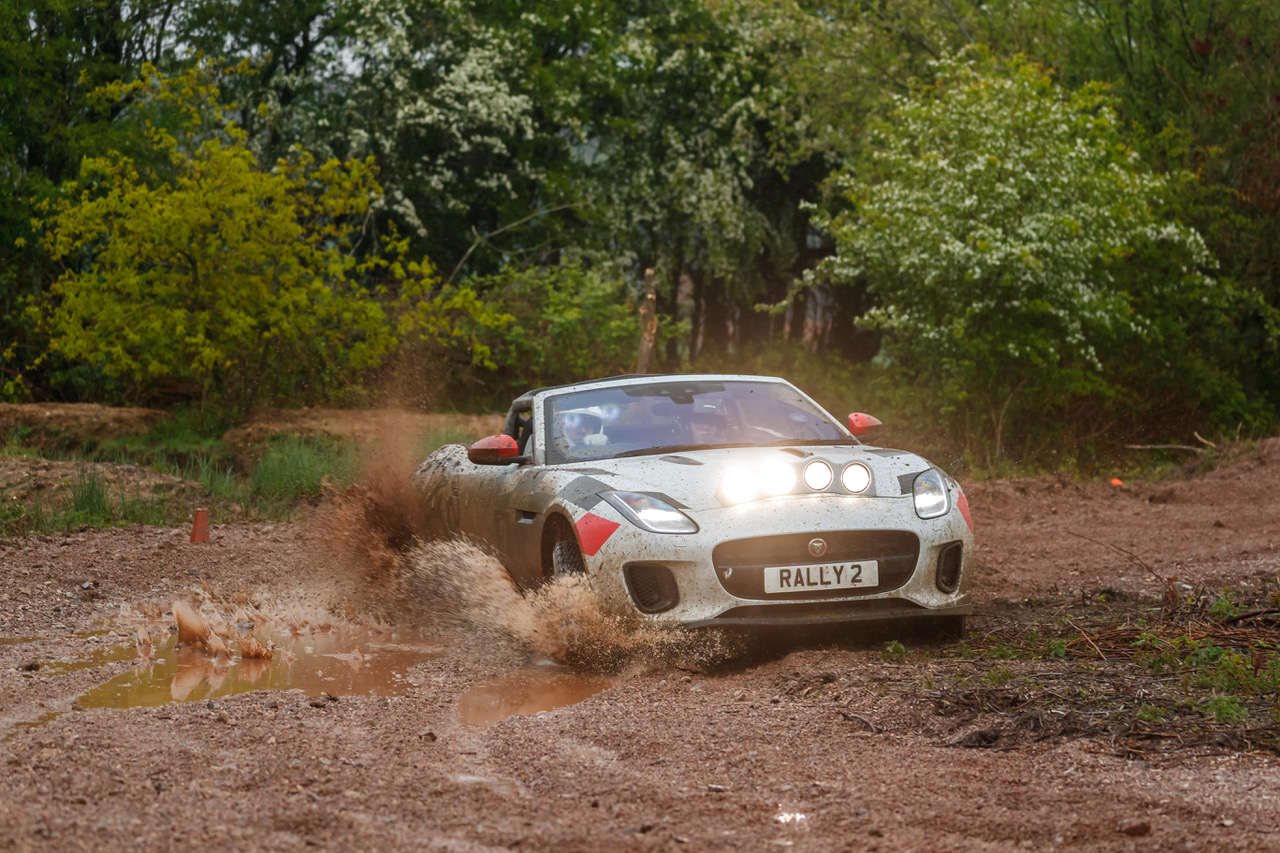 Until last year, that is. No, Jaguar is not planning to enter a rally car in the world championship, but it has created something which brings back those memories of NUB120 being driven hard to victory by Appleyard. To commemorate the anniversary of the launch of the XK120, last year the company gave the green light to a team of engineers. They were told to develop and build a car (actually two) which would be similar in spirit to Appleyard's rally car, but based on a current production vehicle. An open-top F-type was chosen, with its very rigid aluminum body. It is powered by the 2-liter 300 hp turbocharged four-cylinder engine, with a bespoke, loud exhaust. The standard car's 8-speed ZF hydraulic torque converter gearbox is retained, as well as the mechanical locking diff of the S version, the suspension is raised, brakes modified, special shock absorbers installed, as well as gravel-spec tires. A roll cage built to FIA rules surrounds the two rally seats with their harnesses, and a bank of high-intensity lights can be installed for night stages. Sounds good? 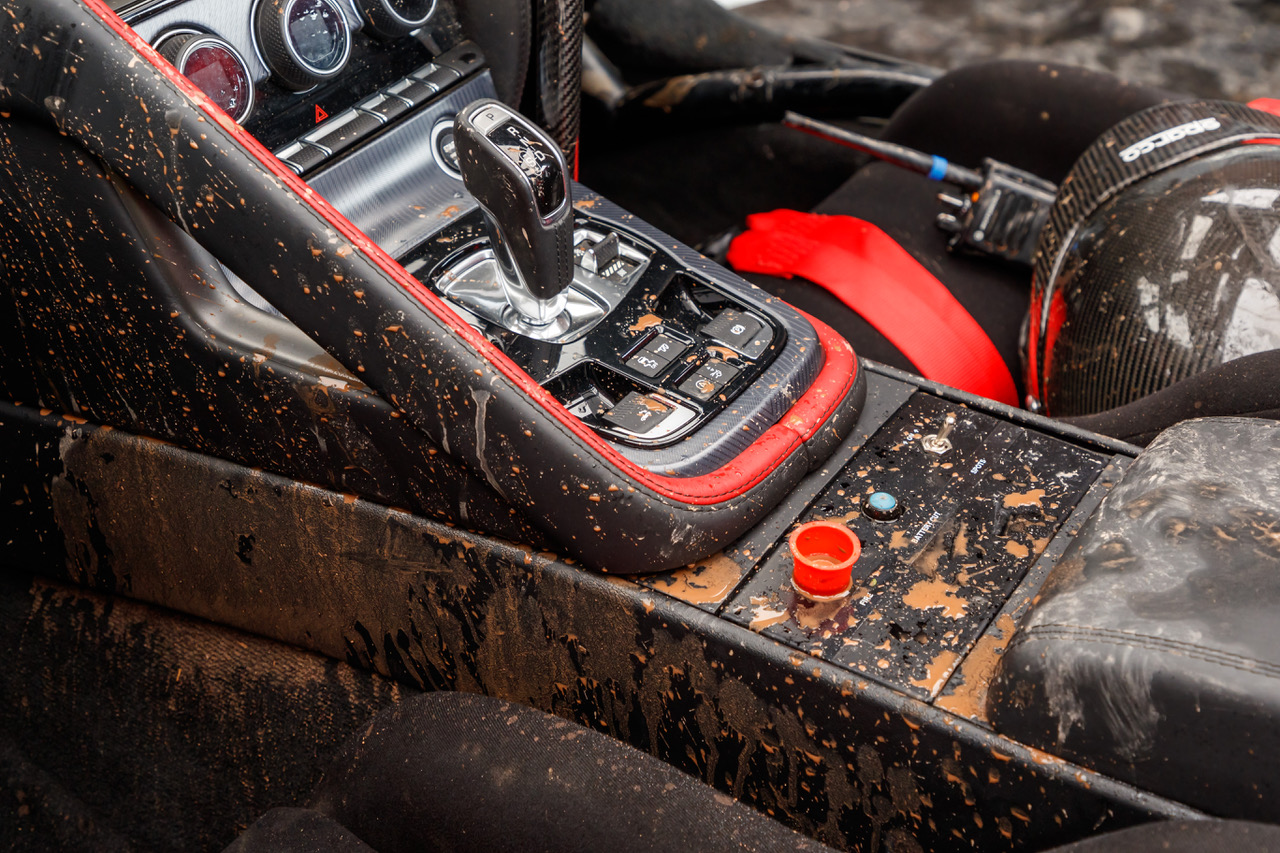 It does, and now I am standing in front of it at the secret JLR testing facility in Fen End, and the weather has turned suitably British. It has been raining for over 24 hours, and if an alien landed here today, he would no doubt conclude that the world of humans is made entirely of mud. The white Jag is still clean, but judging by the amount of precipitation, this condition won't last. My companion on the drive will be Jade Paveley, a young female rally driver, Junior Welsh Champion. She shows me around the car and remains in the car with me (displaying considerable bravery) to coach me on the conditions on the track. Some of the surface is tarmac, some gravel and a lot just plain mud. The Jag takes off willingly, and we arrive at the first chicane fairly quickly. The brakes work fine, the ABS has been removed, so it's just my left foot and the brake pedal: in a two-pedal car I always brake with the left foot. Even on the really slippery stuff the Jag gathers up its skirts and goes, braking and tight turns are more of an issue due to the Teflon-like muck. I have to tiptoe in some places, and on a gravel section to carefully avoid being bogged down in the deep ruts. 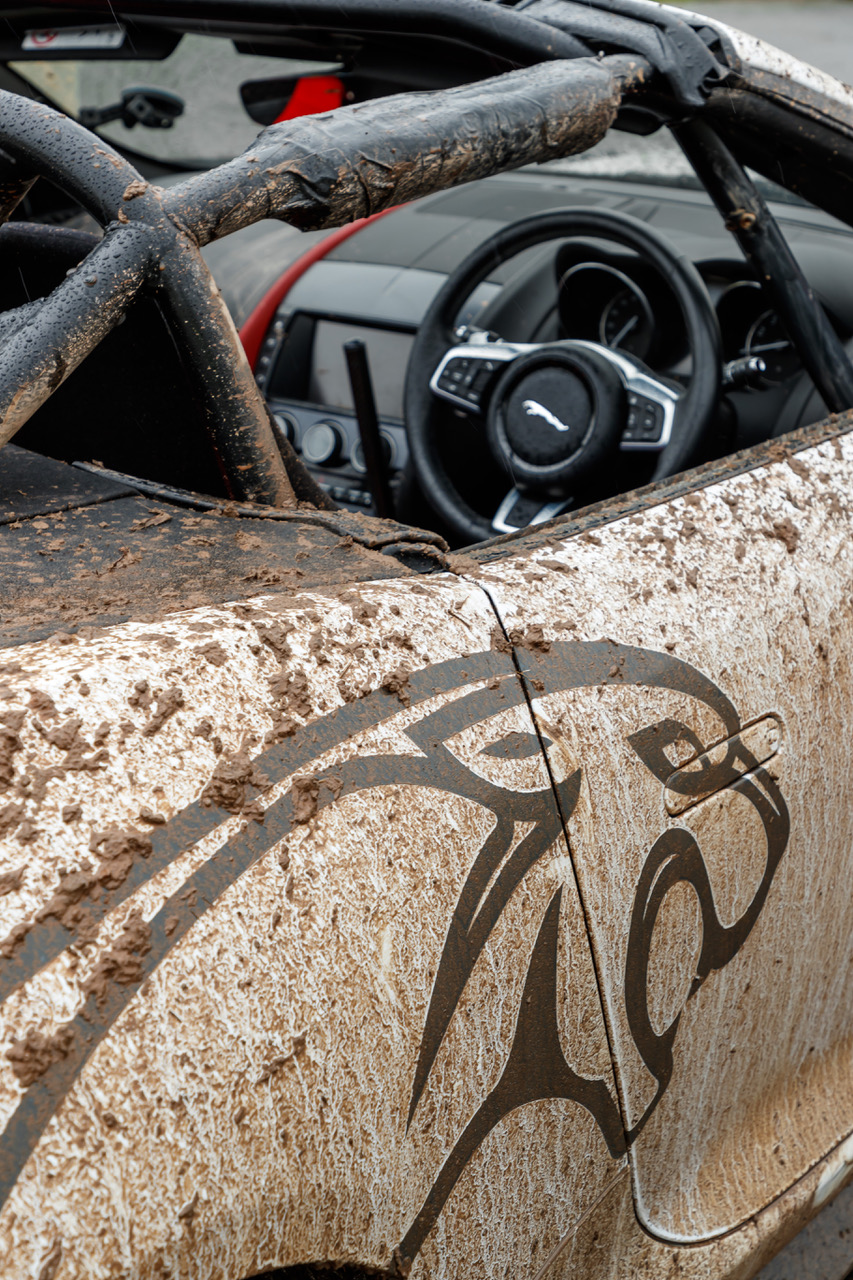 Many laps of the rally course later, I am a trifle too gentle with the throttle and the car understeers in the ruts more than before, and consequently I pass too close to the photographer (sorry, David!). The changing surface is really tricky, and the rain keeps refreshing the slippery top layer. However, I am more and more confident, and the car obediently goes more or less where I want it to go. It is really enjoyable, sitting in a noisy Jag, being splattered with sticky mud, looking at the world with my head turned sideways. It feels a bit funny, having this kind of old-fashioned rear-wheel-drive fun in a thoroughly modern, alloy-bodied car. After a few minutes of spirited driving the gearbox starts to overheat, and the selector lever jumps out of manual selection; the transmission oil cooler does not receive sufficient airflow with the protection plates under the engine compartment. This could be rectified if the car was to be rallied in earnest, but today it is just a minor annoyance. Apart from this slight drawback, the rally F-type is a very cool device, and I'd like to try it again. Perhaps without the rain this time... I still think Appleyard was a bit crazy, but now I can understand him better: rallying, with its combination of teamwork and individual courage, suits the British national character. And so does this special car. 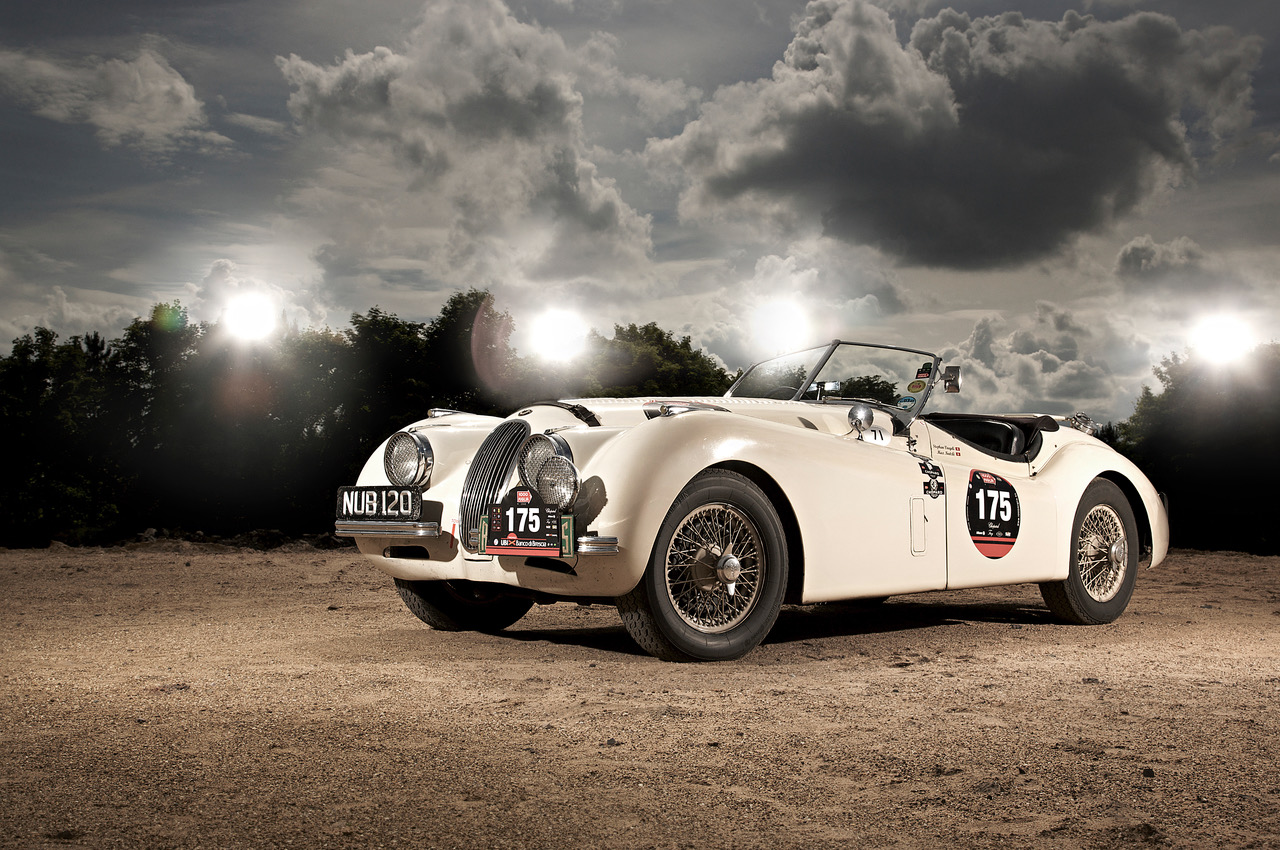 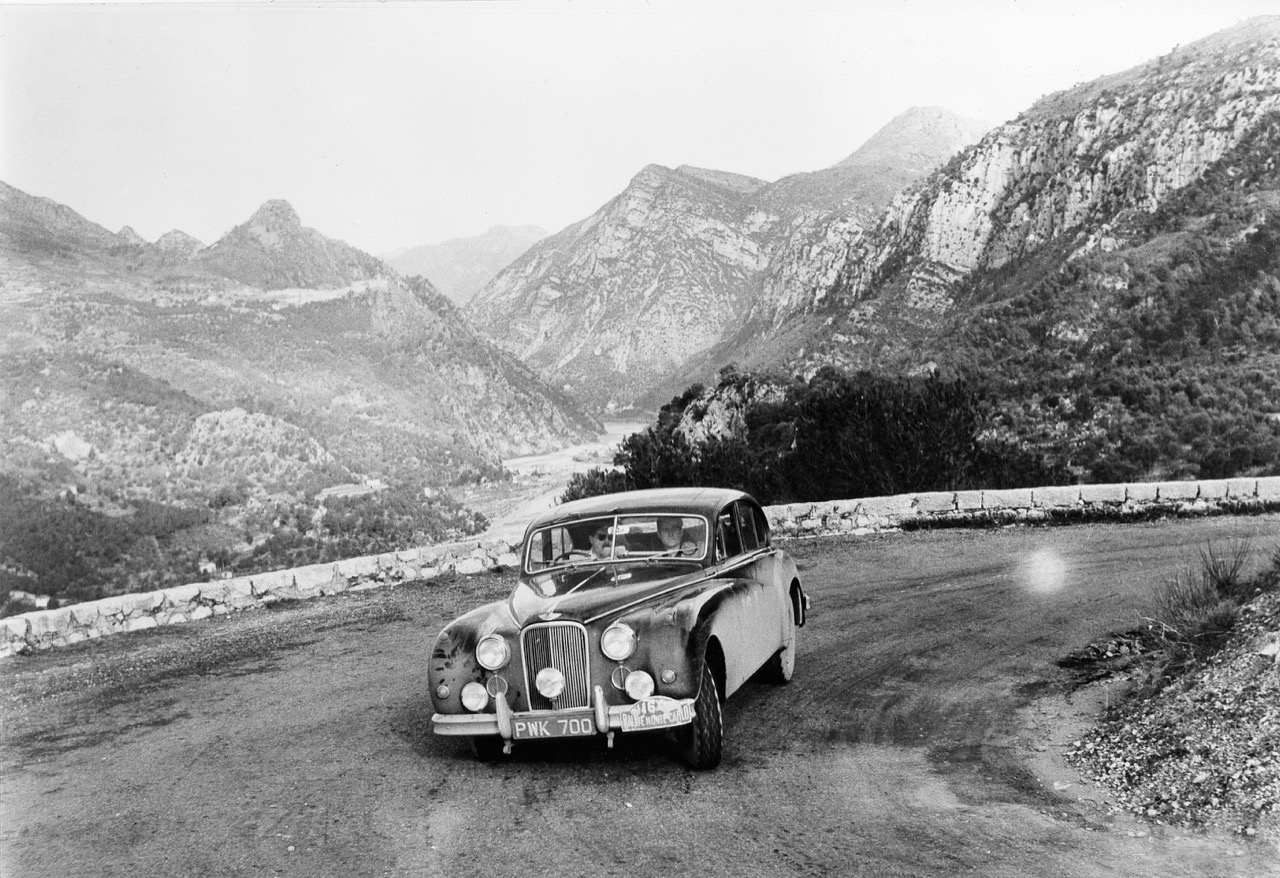 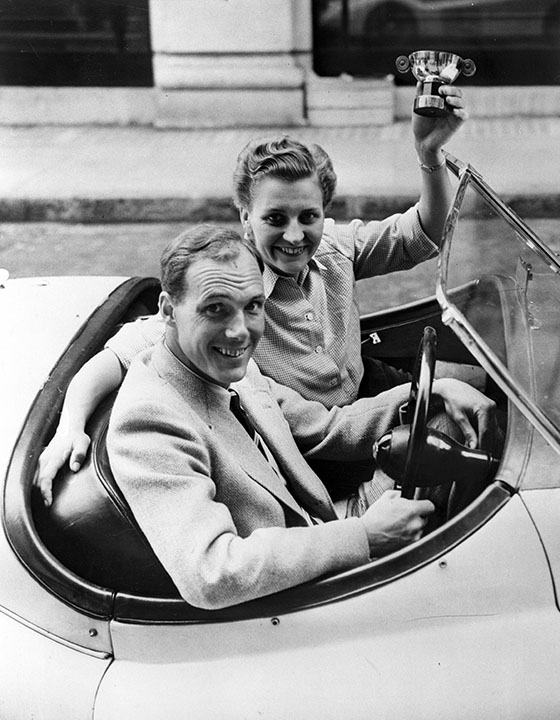